Last year I said 2012 is hard to beat, but 2013 really made it. I am just a bit disappointed about not having written more about it. I take photos to remember trips and moments, but often written blog entries would have been better. So, I am again sitting down and trying to recap highlights of 2013 after the fact. My twitter timeline tells the story in short messages. I picked some highlights in chronological order.

In January, I officially became a software developer. I finished my apprenticeship successfully and continued to work full-time at hmmh developing websites and managing some open source community efforts in the company. That also meant earning real money for the first time. I started to look for my own flat to avoid commuting almost 3 hours per day. Doing that for the last 2.5 years was enough. However, getting a good flat in Bremen turned out to be very difficult as I found out during the first months of the year.

February. The first event of the year was not about MDN, but about the new kid WebPlatform.org. The documentation sprint took place at the Supermarkt in Berlin. I met Chris Mills there for the first time and really liked some ideas he and others had about open web documentation on WPD. Of course not knowing we will meet again later in the year for new reasons.
I did one day of backpack wandering in Berlin afterwards. I enjoyed walking along the “Straße des 17. Juni” from the “Siegessäule” to the “Brandenburger Tor” in the cold Berlin. I took some photos. 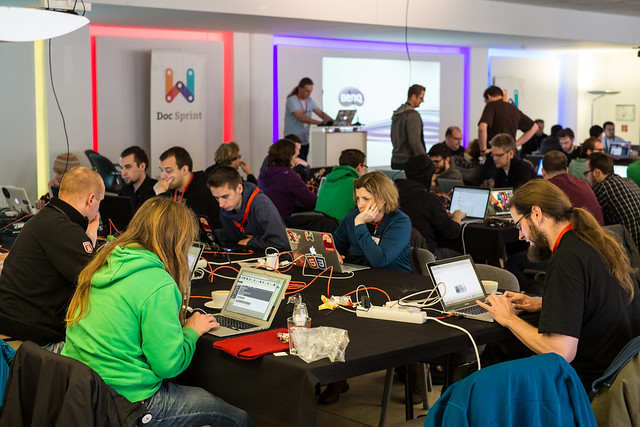 Thanks to Andreas Dantz for this photo (we have met later in the year for real, too! Who would have known!)

In late February I got glasses 8-) A friend and I went to another concert of Madsen in March which I liked a lot. I should add more concerts to my calendar!
And: I finally moved to my own flat in April after four months of me being picky plus having been rejected by rentors because of age, gender and income (yes, this is Germany). April 12, 2013, was the first night in my new self-dependent life (at this point, I didn’t know it would become even more self-dependent later).
Hello Bremen, hello shiny city life. Lots of things to set up in the flat, including getting an internet connection, which turned out to be the most horrible thing for me in 2013. But never give up, keep on rocking!

April. #deHacking. Several German Mozilla hackers got together and presented different areas they contribute to in Mozilla spheres. I talked about MDN and how we try to document all the fancy stuff. This was a great get together. Kudos to Julian Viereck and to Tim Taubert for organizing this. 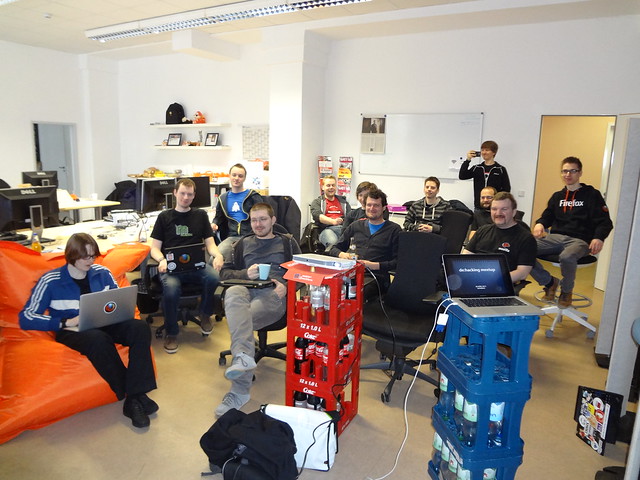 Still April and no internet connection in my flat, but I was able to tweet from a plane while above Greenland in 10600 meters altitude with 830 km/h. Sometimes life makes it’s own jokes.

At the MDN Vancouver doc sprint we had good discussions about content planning and less actual sprinting. Nevertheless the outcome was fruitful and set milestones for the upcoming months. Ali Spivak was taking us to Granville Island where we found awesome food and more on the public market. I also had a long and relaxing walk through Stanley Park and Vancouver city with Jérémie Patonnier afterwards. 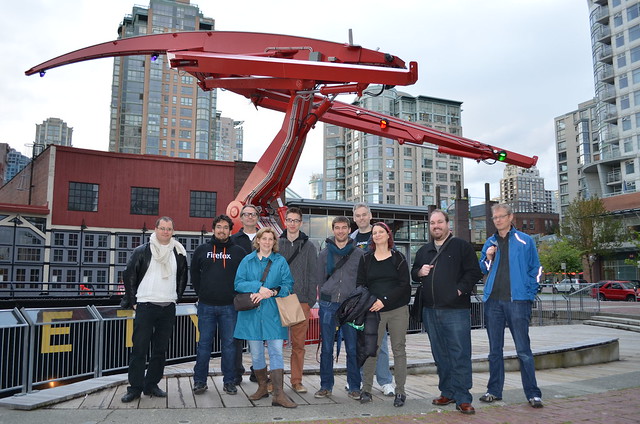 Leveling up with Mozilla

May till August was different. No internet connection in my flat; my day-to-day job. Sometimes you just go to work and live from week to week. And summer. And things.

House-warming party in my flat with a Firefox cake made by Fabian, Niklas and Tini:

In these three months something was happening in the background: I was interviewing with Mozilla for a staff position as a Technical Writer for MDN. I had fast heart beats in every single interview. The question arised almost every day whether it will mean the end or the next level for me and MDN. On July 1st, I signed the contract. Good moment. Super happy and a bit afraid of the new upcoming task, the last 3 months of agency life began.

My last gig. In lovely Hamburg almost my entire team attended a TYPO3 barcamp. I spoke about open source communities, about “the Cathedral and the Bazaar” and got to know some new stuff in PHP development.
Lots of fun in Hamburg, too ;-). At some point we should think about an MDN sprint in Hamburg in summer.

Back at home I was really pissed about still not having an internet connection. I had many telephone calls and also considered a different ISP, but things were just ridiculous and my patience got really really taxed. Meh.

Fortunately, later in August, I was in the plane to Toronto again. The larger “Developer Engagement” department, I am now part of at Mozilla, had an offsite meeting and we really got together quite well. On the first day, no mobiles or laptops were allowed and we did some team building activities. Good to get know what people in the team are up to and to see how my role fits into the larger picture. We visited Steam Whistle, a brewery in Toronto and BarChef - the most epic cocktail bar I have seen so far (albeit their Flash website).

Right out of the plane from Toronto on to rock n roll: Ärztival in Bremen in the same night.

Good news in September: On the 19th, my internet connection was working finally. Bremen felt like my new localhost after half a year living there already.

With my first day at Mozilla in front of me, it was time to do some vacationing before. End of September a friend and I did a train trip to Amsterdam for 3 days. We visited Heineken Brewery, Anne Frank House and more in the city of coffee shops. I only took a few photos - it was fun!

Monday, September 30, 2013. My first day at Mozilla. I got my work computer on the weekend before and was still setting things up. And then you sit there Monday morning in your flat, online on the interwebz and realize: “Oh - this is work now!”. It was a new feeling. No office, no real colleagues, no one telling you what exactly you should do today or this week. But I knew what to do, almost four years involvement as a volunteer help a lot. And the new team is there, too! Not drinking a coffee with you, okay, but always reachable via mail, Vidyo or IRC and happy to help you. After moving out to my own flat, this was the second step in 2013 for a new self-dependent life.

The new job began and in the first week I was flying to California for the Mozilla summit and two onboarding weeks in Mountain View and in San Francisco. However, I was about to get stuck at Frankfurt airport, because I forgot to renew my ESTA visa (I was in 2011 in the US for the first time. ESTA is valid for two years - gotcha!). But life meant it good with me. KaiRo was in the same flight and he kind of calmed me down. While boarding, I set up a mobile hotspot with my phone, used his laptop to fill out the ESTA forms, paid with my credit card and: Success! The airline accepted it and I got on board. Phew!

The Mozilla summit was pure awesomeness. I met long time MDN contributors like Trevor Hobson from Australia and also Bill Gianopoulos with whom I organized a MathML booth at the innovation fair:

The best session I attended was John O’Duinn’s “We are all remoties”. With me being at the company for just a few days, his talk was like the best introduction to remote work for me.

I learned a lot more about the Open Badges project and we had an MDN Hack night with some folks from India. Wow!

After the summit I spent a week at the Mozilla headquarters in Mountain View. Ali got me a Firefox OS Geeksphone Keon and I enjoyed working in the office. Not much sights in Mountain View, but I took a long walk through the city to the Computer History museum, where I also found artifacts from Mosaic and Netscape.

Back in Bremen I learned how to work remotely and got deep into JavaScript documentation clean-up and our redesign.

The year ended with two weeks of rest and I was meeting family and friends. Similar to last year and very good for energizing.

Thanks to all the amazing people I met in 2013! I look forward to 2014 with all the fun and the challenges.